Orangeville - Our Upstate Game of the Week featured the battle of the Ville's, with Orangeville playing host Milledgeville. Leading up to the game, a lot of people put their bet on Milledgeville to win big, but Orangeville wanted to prove how much they have progressed, and had a game plan in place to limit the Missiles firepower. Milledgeville opened the game up with the ball, and began their drive from their own 40 yard line. Distributing the ball between Carson Boyer, Jack

Orangeville - The Orangeville Broncos played their 2nd Saturday contest of the season, but this time the temps made the game really feel like fall. It was a game Orangeville needed to win to stay headed in the direction of their goal, the playoffs. However, Warren would have their say in this one as well, as the Warriors gave the Broncos everything they had. Orangeville quickly jumped out to a 22-0 lead in the first half, scoring on their first 3 possessions. Carter Kleckler

Hanover - Our Upstate Game of the Week featured a pair of teams both looking to make a name for themselves in 2018, and work towards making the playoffs. The Orangeville Broncos traveled to Hanover Friday night, seething from a Week 1 loss they let get away, to take on the River Ridge Wildcats who pitched a shutout in Week 1. It is only Week 2, but this game had a lot riding on it as far as playoff implications are concerned for both teams. The Broncos would strike early and

Orangeville - Our Upstate Game of the Week featured the Orangeville Broncos and the Polo Marcos, and boy did this game live up to its billing. Polo entered the game winning 9 of their last 10 games over Orangeville since 2006, but it was Orangeville who entered Saturday's contest as the favorite in this game. Right off the bat to start the game, Polo wanted to send a message to everyone who was doubting them, as Braiden Soltow took the first carry of the game 63 yards to the 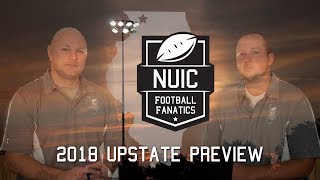