The East Dubuque Warriors enter 2018 with an opportunity to get back to their recent winning ways. Wins have been tough to come by for the Warriors since they moved from the Upstate division to the Northwest division in 2015. Coming off a competitive 2016 season, the Warriors took a step backwards in 2017, with most of the same team in tact. In 2018, they will return some key players, but need to find ways to compete with the upper echelon of the Northwest if they want to mak 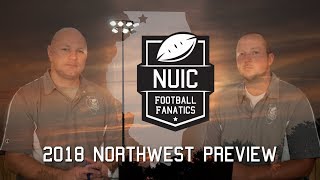 Orangeville - On a sloppy night in Orangeville, the Broncos would host the East Dubuque Warriors in an NUIC crossover game, a rematch from the year before. Orangeville was in search of their 5th win to become playoff eligible, while the Warriors tried to play spoiler. This game became a defensive slugfest, as neither team could get anything going offensively for the entire game, as a tie game of 0-0 at the half stood through the second half as well forcing this game into over

Forreston - Friday night saw the Forreston Cardinals play host to the East Dubuque Warriors. Forreston was in search of win number 5, and playoff eligibility, while East Dubuque was in search of keeping their playoff hopes alive, a loss would officially eliminate them from playoff contention. The Cardinals would make a quick night of it however, as they jumped out to a 34-0 lead at halftime while they had nobody carry the ball more than 3 times on the night. Forreston would r
1
2
345
COUNTDOWN TO KICKOFF
FACEBOOK
TWITTER