Freeport - We knew Saturday was going to be a game between 2 very storied programs, but one of those teams were the #1 ranked and undefeated Lena-Winslow Panthers. The Aquin Bulldogs knew what the uphill battle was going to be, but I don't think they envisioned it to be the way it was. Le-Win scored on their first play of the game behind All-State running back's Rahveon Valentine's opening play 69 yard TD run, and the Panthers were off as they were up 21-0 just 4:51 into the

Round 3 | Le-Win vs Aquin Preview

Freeport - There is a lot of history when you talk about Lena-Winslow and Aquin. You can first look at state titles, as these two teams combine for 5 of the 18 state titles that the NUIC has won in its history. You can look at their playoff success overall, as both schools boast 30 plus wins in the playoffs in history, and both have double digit appearances in the state quarterfinals. Their history has crossed paths, as they were both original members of the NWIC, but were se 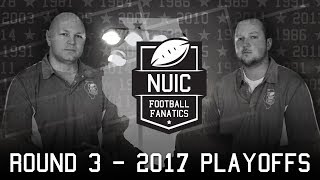 Round 2 | Aquin vs Stockton

Stockton - This NUIC Upstate showdown in the 2nd round of the playoffs featured conference rivals in the Stockton Blackhawks and Aquin Bulldogs. In week 8, these two faced off in a conference championship match-up where the Blackhawks edged the Bulldogs 16-14. When it comes to the playoffs, these two schools have only met twice before today, with Aquin holding a 2-0 record, and the previous two playoff games also took place in the 2nd round. Today was going to see who would a

Round 2 | Preview Stockton vs Aquin